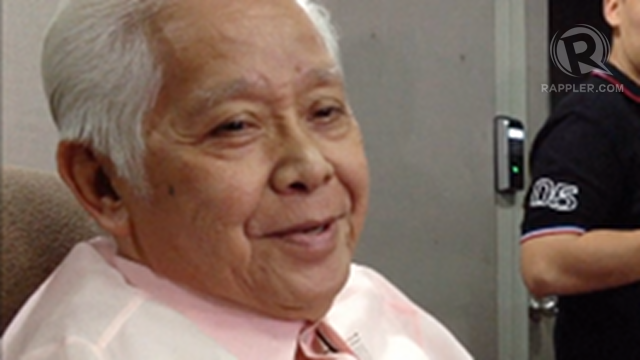 MANILA, Philippines – If Philippine elections take a longer time than the US polls, blame it on politicians who never admit their loss – and yes, men and women who practice election law.

Take it from a top election lawyer himself, Commission on Elections (Comelec) Chair Sixto Brillantes Jr, who shared some lessons from the US presidential elections that ended Wednesday, November 7. US President Barack Obama won a second term while his rival, Mitt Romney, immediately conceded.

(Here, we find it hard to make politicians concede. Three years after the elections, we still contest its results. No one wants to lose. There, once the results come out, once the politicians see these, they immediately concede.)

He added that election protests rarely happen in the US, unlike in the Philippines.

(Not only are the laws long, the resolutions are, too. We are all too good at interpreting issues, we each have our own takes.)

He noted the issue facing actor Aga Muhlach, a congressional candidate in Camarines Sur, on whether he has resided long enough in the area to represent it in Congress.

(Just one issue, like Aga Muhlach's, we would argue about that for a long time. That should have been a settled issue. We've long been talking about issues like residence, registered voters. That has always recurred.)

A veteran election lawyer when he was named to the Comelec, Brillantes used to advise prominent candidates like the late Fernando Poe Jr.

Unlike in the Philippines, the US' Wednesday electoral process ended on D-Day itself. Obama delivered a speech, where he thanked Americans for making him a "better president."
Americans also celebrated in the Philippines, led by US Ambassador Harry Thomas. He hosted an election day event at SM North Edsa, Quezon City.

“The President of the Philippines recalled how 4 years ago, President Obama’s message of hope resonated with the American people and the world, marking the beginning of the long road back for one of the world’s greatest countries," said Presidential Spokesperson Edwin Lacierda.

The Philippines' Department of Foreign Affairs also congratulated the reelected US president. – Rappler.com