The opening ceremony featured Engr. Arthur N. Escalante as keynote speaker. Engineer Escalante was once one of the USeP administrators and faculty. At present, he is a member of the USeP Board of Regents representing the private sector. 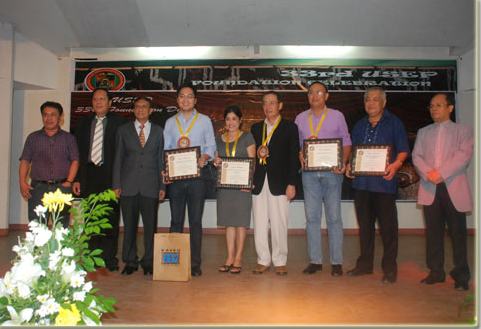 In the event of the University’s 33rd founding anniversary, it honored institutional partners who have supported USeP all through the years.

The Mindanao Daily Mirror and the Philippine Information Agency – Regional Office XI through Mr. Efren P. Elbanbuena, regional director, were recognized for being the media and development partners of the University. The Davao Light & Power Co., Inc. represented by Mr. Vic Sumalinog, corporate community relations manager; Engr. Rico L. Peligro (an alumnus); and the Operation and Maintenance Technology Philippines, Inc. through Mr. Hideyuki Tanaka, general manager, were also given recognition as consistent benefactors of the University’s programs and development undertakings.

The University community also recognized the support of Congressman Karlo Alexei B. Nograles of the first district of Davao City for his contributions in the implementation of the USeP programs, projects and other development undertakings. Congressman Nograles personally accepted the plaque of recognition on December 15 during the Faculty and Staff Night.

In the 33 years of service of the University to the public, it is worth mentioning that the University has achieved a lot. Just this year among the significant accomplishments of USeP are as follows: one of top 201+ academic institutions in Asia per Quacquarelli Symonds study in 2011; ranks 5th among Philippine universities in the 2011 Asian University Rankings done by Quacquarelli Symonds; Top 1 Performing School in the August 2011 Agricultural Engineer Licensure Examination; and Top 2 Performing School in the August 2011 Geologist Licensure Examination. Also, a graduate of USeP Tagum topped the September 2011 Licensure Examination for Teachers in the Elementary Level. Several graduates of the University belong to the top 10 of different government licensure examinations.

President Alibin attributed these achievements and accomplishments to the quality and unity of the faculty and staff and administrative competence and support of the University.

Among the highlights of the celebration are the Bowling Tournament; Search for Outstanding Faculty, Researcher, Extensionist and Alumni; a showdown of musical presentation of various colleges and units during the Faculty-and-Staff Night; and the Alumni Day that happened on December 17, 5:00 p.m. at the University Social Hall, Obrero campus.

“Upholding Excellence through Unity, Stewardship and Professionalism” is the theme of the celebration. (USEP PIO)