"I'll pray at the party," one half-naked boy said, his arms and chest covered in still-wet neon paint. His Manila-accented voice is just barely audible over the music, whistles, and random cries of "Pit Senyor!" which means “Call on the Lord.”

It was Sunday, the last and most festive day of the Sinulog festival, one of Cebu's biggest celebrations. The boy and a hundred others made up the slow-moving crowd snaking down Mango Avenue toward Juana Osmeña Street in a strange kind of beer-soaked, paint-smeared pilgrimage to the Baseline Recreation Center. A party was happening there, and apparently, everyone was invited. 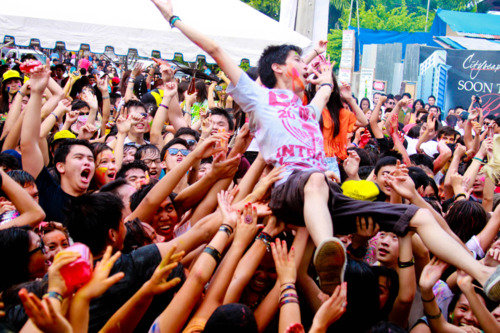 The scene at Baseline was right out of an "MTV Spring Break" special. A DJ commanded the teeming crowd from the safety of the makeshift DJ booth, which was perhaps the only spot that had any kind of breathing room.

Lovers clambered up their partner's shoulders for a better view of the stage. Guys with beer backpacks funnelled drinks right into the mouths of crop-topped girls, who promptly jumped atop tables and danced.

Water guns filled with expensive alcohol were aimed and fired. Random strangers chased each other with cups of paint. Beer bottles and cigarettes littered the floor. Every so often, someone will chant "Pit Senyor!" and everyone would join in. All this at three in the afternoon.

This is exactly the scene that most young people envision and fly to Cebu for. Never mind that the Sinulog is meant to honor the image of the child Jesus. As that boy in the crowd had said, they'll pray at the party, and honoring the Sto. Niño comes second.

Even in prayer though, the spirit of Sinulog was festive. It would seem it always has been. According to the Sinulog Foundation website, the festival originated from a dance ritual done by pre-Hispanic Cebuanos to honor their wooden idols. It was only when the Spaniards came and converted the native to Christianity that it was celebrated in honor of the Sto. Niño.

At any rate, the atmosphere in and around the church was no less jubilant than the mood at the parties.

Pit Senyor and the party

In the days that led up to the Sinulog Grand Parade, masses were held at the Basilica Minore del Sto. Niño, which houses the original image of the Child Jesus brought by Magellan when he landed in Mactan in 1521.

During mass, devotees filled the church and overflowed to the courtyard and the streets around it. A priest said mass in Cebuano from behind the altar, the only place with room to breathe.

Parents hoisted their children on their shoulders so the little ones could see the image that is the center of all the worship. The children waved at the image happily, evidently excited to see that Jesus is a child, just like them.

Women with wrinkled faces joined hands with uniformed students as they sang "Amahon Namo" at the top of their lungs. Ministers distributed communion to the waiting mouths of receivers who promptly started clapping the tune of the communion song as they returned to their spots. Strangers became friends as they grappled together through the crowd to take a photo of the image. Everywhere, people raised their own miniature versions of the Sto. Niño to the sky, smiling as they cried victoriously, "Pit Senyor!"

Some say partying is inappropriate for a religious festival (one Cebuano even joked that people take back a week or so of holiness in just one sinful Sunday). But maybe the heart of the festival isn't even religion — it did, after all, originate from a pagan ritual.

Maybe the festival is not really rooted in prayer, but in dance, in joy? Or maybe prayer? Who's to say the revellers were not actually calling on God as they danced the sun away? – KDM/CM, GMA News

Sinulog 2013: Praying at the party
http://www.gmanetwork.com/news/story/291785/lifestyle/travel/sinulog-2013-praying-at-the-party