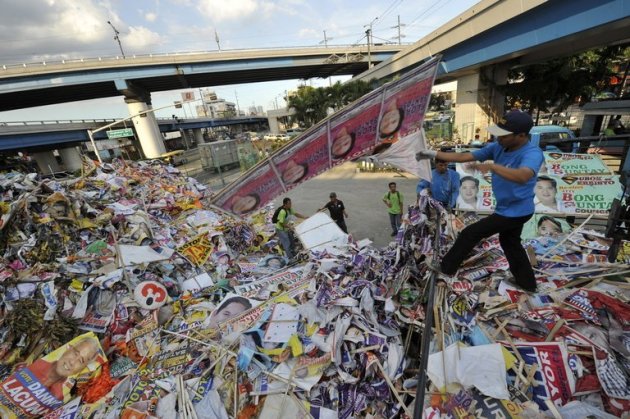 AFP News - Philippine workers discared election banners and posters at a depot in Manila on May 11, 2010. The Philippines is set to regulate Internet advertising in May mid-term polls as part of an effort to rein in campaign spending, according to election officials

Candidates in the 2013 polls may still bombard the Internet with ads despite a new rule limiting online campaigns, as long as they do it for free.

This, as Commission on Elections Chairman Sixto Brillantes noted that limits on ads across all media are put in place to control campaign spending.

For online ads, all costs except for the website which acts as the candidates' main website will be considered part of campaign finance, the poll chief said.

Online advertisements that are free of charge, however, such as posts on social networking sites and blogs, will not be limited.

"You always have to relate campaign propaganda to the campaign finance," Brillantes said.

He added that limits on campaign funds are the only practicable form of control.

In the Philippines, candidates are allowed to spend only a maximum of P3 per registered voter in their constituencies.

Political parties and party-list groups may meanwhile spend P5 for every registered voter in the constituencies where they have official candidates.

Brillantes also noted that even ads paid for by a third party will be recorded as part of campaign contributions received by candidates.

The poll chief admitted, however, that the implementation of online election ad limits will be tricky at first.

"We will have to monitor ourselves as to the implementation of the new rules," Brillantes said.

Problems may arise during the opening of the campaign period for the senatorial polls but the implementation is seen to be smoother come the 45-day window for local candidates' campaign.

"We have the assistance of so many people--we have our citizen's arm, civil society, NGOs," Brillantes said.

"So maraming magsusumbong. Pati yung taong bayan mismo (We have eyes all over. Even the voters will be engaged)," he added.

Candidates have meanwhile been urged to remove all "epal" signages before the start of the campaign period.

All regulations, including prohibitions, regarding campaigns take effect during the 90-day window from Feb. 12.

Also prohibited are ads on public utility vehicles such as buses, jeepneys, trains, taxis and tricycles.

Even product endorsement featuring candidates in the May 2013 polls should be removed, Brillantes said.