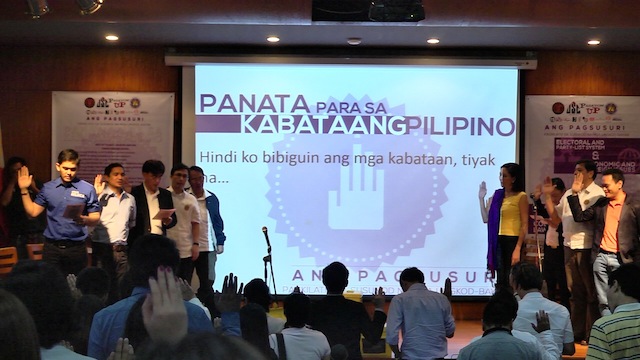 MANILA, Philippines - If elected, what would lesser known senatorial candidates do with their pork barrel?

For most of the candidates present at the senatorial debate organized by the University of the Philippines-Diliman Student Council on Thursday, January 17, the answer is none -- because they would choose to abolish the fund.

"There will be no pork barrel. We will work to eliminate pork barrel because that is the root of political dynasties. There should be no pork barrel at all. No ifs and buts about it," said Baldomero Falcone of the Democratic Party of the Philippines.

Except for Hontiveros who is running under the ruling Liberal Party, all the candidates present in Thursday's event are not affiliated with a major political party.

They're the so-called alternatives to better-entrenched politicians or, to cynics, fringe candidates in the May senatorial race. The senatorial bets of the Democratic Party, for instance, were first considered nuisance candidates by the Commission on Elections (Comelec).

But a standing room-only crowd at the UP College of Law's Malcolm Hall listened to them. Students, experts and netizens grilled them on issues concerning electoral reform, foreign affairs and the economy.

The candidates were also asked to state their positions on issues such as the oil deregulation law, OFWs, education, Scarborough shoal, Visiting Forces Agreement, gender equality, GDP and the peace talks.

Dubbed #AngPagsusuri, the event is the first in a series of debates organized by the University of the Philippines in preparation for the May 2013 elections.

A senator gets about P200 million in pork barrel funds each year, an amount that makes up a substantial amount of congressional allocations that lawmakers receive each year.

Llasos, a lawyer, said the PDAF, or the Priority Development Assistance Fund, and other discretionary funds are the root of graft and corruption and should therefore be abolished.

"I know the function of a senator. The function is legislation, to create laws, investigations in aid of legislation and education on issues. There is no mention of being a contractor," Llasos said in a mix of English and Filipino.

For the former and incumbent party-list representatives in the group who are no stranger to pork barrel, they said it should be used for priority projects, with every allocation duly accounted for.

Hontiveros said PDAF allocations must be subjected to “the system of ordinary people” so that they can dictate the kind of projects that the pork barrel will subsidize, while Señeres said it should be “scrutinized up to the last peso."

Casiño offered a concrete use of the pork barrel: collect all and give to state colleges. In outlining his platform on education, Casiño acknowledged the need to provide more funding for universities, which can be sourced from the PDAF and by re-aligning funds used to pay for the country’s P5-T debt.

But what would the candidates do if they were given P1.6 million as a gift from the Senate President? (Senate President Juan Ponce Enrile did this to senators, except his 4 critics, last Christmas.)

The answer is similar – none – because they would all return the P1.6 million.

Penson said he would first consider whether the money could be utilized to help people.

“Otherwise, if this fund is proven to be wrong, it should be returned or subjected to audit into the Commission on Audit,” he said.

Casiño went one step further and said that there should be a policy change altogether.

“As long as that is the policy, even if you return the P1.6 million, that will just be redistributed to other senators. It doesn’t kill the problem. We should send those to Typhoon Pablo victims and change the policy so that savings are returned to the Treasury,” he said.