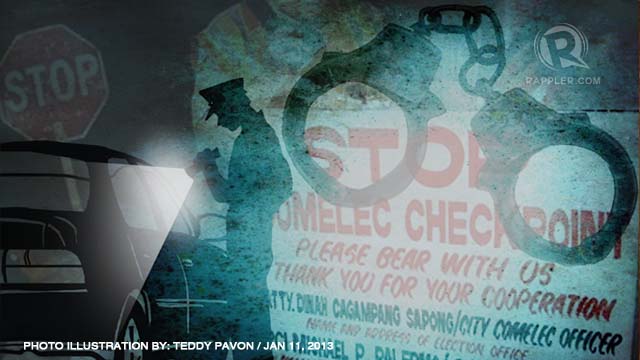 MANILA, Philippines – The Commission on Elections has ordered the setting up of police- or military-manned checkpoints for the “effective implementation” of the gun ban, which starts Sunday, January 13, and ends on June 12.

The uniformed men at these stops will, however, also be on the lookout for signs of irregularities other than firearms possession. So what exactly are police officers looking for when they stop a vehicle at checkpoints? What types of behavior can lead to an arrest?

The basic rule, according to interviews with policemen, is that there is sufficient or corroborating evidence that suggests a crime was or may be committed. These may include suspicious items or actions that can cause danger to other persons or to one's self.

Cops make judgments calls. Based on the Philippine National Police’s operations manual and the Comelec’s guidelines for the setting up of checkpoints during the election period, here are some of the things that may justify an arrest:

The vehicle refuses to stop.
The passenger/s of the vehicle appear/s nervous or suspicious or acts unnaturally.
The officer has reason to believe that the passenger is a lawbreaker or there is evidence of a crime, like drugs, blood stains, etc.
The officer has received a prior and reasonably corroborated tip on the motorist’s possible illegal activity.
Driver fails to show a driver’s license.
Driver is under the influence of alcohol or drugs, or there are illegal substances in the vehicle.
There are items that may be used for destruction found in the vehicle.
The driver or adult passenger cannot clearly establish his or her relationship with the child or children travelling with him or her.
The driver or passenger is transporting animals without a permit.
The gun ban will be in effect for 5 months. Citizens, when stopped at checkpoints, should also know their rights. Click here for Rappler's tip sheet on how to avoid being subject to abuse at these stops.