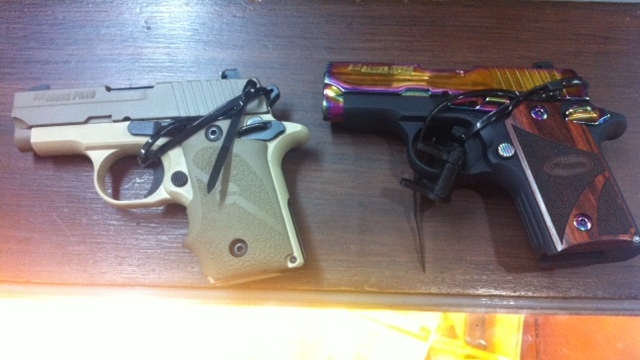 GUN SHOPPING. Guns suggested to the writer at the store. Photo by Natashya Gutierrez.

MANILA, Philippines - I held the pistol delicately, turning it over, examining it.

"Can it kill?" I asked the salesman at a well-known gun store in Metro Manila.

"Yes. The bullet is strong enough," he said.

"It's not like you'll have 7 attackers at once. That's all you need," he said.

I had walked into the store, utterly clueless, only telling the salesman I wanted to buy a gun. Never mind that I had not known anything about guns, or that I had no idea how to fire this one resting on the palm of my hand, or that I didn't even want to own one! He said I could have it. With a discount even, if I paid in cash.

He took the gun from me and rested it back on the shelf, handing me a piece of paper in exchange.

"Just submit these requirements to us, so we can apply for a gun license," he said.

Ticked on the paper were: police clearance, proof of billing, certificate of employment, 2 valid IDs with a picture, ID pictures and a cedula.

REQUIREMENTS. A copy of the paper from the gun store listing the required documents from gun buyers. Photo by Natashya Gutierrez.

Then, an envelope. Inside were application forms for the Philippine National Police (PNP). A form to register for a gun seminar, another for a Directorate for Intelligence clearance, an application to possess firearms, an affidavit saying I have no pending cases against me, an application for a firearm license, and an authorization form prepared by the gun store that I had to sign, allowing them to apply for me.

In all these forms, aside from my basic personal information, it only asked me to sign my signature. Notary Public signatures were to be left blank, as were dates of signing and firearm description.

But none of them had checks next to them.

"How about these? Do I need to obtain these?" I asked.

I paused to clarify.

"You will take care of my drug test? My neuro-psychiatric exam? Meaning you will clear me with the PNP?"

"Yes," he said. "We will even take care of the safety seminar. Kami na rin po bahala," he assured me.

I left the store with anything but an assurance.

But I must admit that for a second, I considered buying the gun – just because I could.

Supt Lenbell Fabia is a medium-set man with a pleasant face. He is the second in command at the Firearms and Explosives Office (FEO) licensing division in Camp Crame, headquarters of the Philippine National Police.

In the Philippines, the first gun license is good for 4 years. After the first 4 years, the license must be renewed every two years. It costs about P360 to P400 a year to own a licensed firearm, depending on the type of gun. A new license for a pistol, for example, which will be good for 4 years, will cost P1,440 – or P360 for each year.

Originally, Filipinos were permitted to own only one long firearm, and one short firearm. But Executive Order (EO) 194 issued under the Estrada government lifted the limits on gun ownership and allowed citizens to own as many guns they want – including assault rifles.

With one license needed for every firearm, Fabia said they rarely deny license applications.

"As long as you meet all the requirements, no problem," he said. 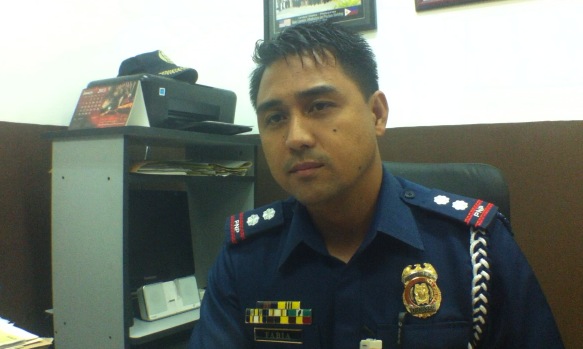 He named the requirements needed to own a gun – dictating off the top of his head the same list handed to me by the gun store. Drug test, neuro-psychiatric test, police and court clearance, among others.

Fabia said the PNP regulates gun stores and issues them licenses to sell.

He added that gun dealerships are given a list of PNP-accredited doctors or drug test and psychiatric centers, and these are the ones they approve, telling me that they usually revoke the licenses of gun stores found to fake documents such as drug tests and clearances.

The store I had visited has been in the business for over 6 decades.

When guns are used in a crime, it is the FEO's job to look into the revocation of a license.

The FEO has a board composed of 7 people who meet whenever there is a complaint or a request for revocation or restoration of a license.

Aside from committing a crime, among the violations that could lead to the withdrawal of a license include firing a gun, lending a firearm, selling a gun, or bringing it in a public or crowded place, even with a permit to carry. Firearms must be concealed at all times, and must be deposited in places like malls.

Fabia also cited an example wherein a license was revoked even when there was no crime committed relating to the gun, pointing to the revocation of Blair Carabuena's license, a Philip Morris executive who became notorious for hitting an MMDA traffic enforcer. While he did not have the gun with him during the incident, the PNP decided that his actions showed violent tendencies leading to the withdrawal of his license.

Also in September, Allan Bantiles, a parent who reportedly threatened to shoot one of his son's classmates, had his licenses revoked.

"In the Philippines, owning a gun is not a right, but a privilege. If it is not used properly, the law can take it back," Fabia said.

All these – responsible gun ownership, basic safety, how to handle guns, even the basics like gun familiarity, assembly and disassembly, how to shoot – are all part of the seminar, said Fabia, that potential gun owners are required to take before citizens are issued a firearm.

These seminars can be taken at the PNP itself or at gun clubs accredited by the PNP.

So what happens then when the gun store "takes care" of the gun safety seminar for their customers? Stores have apparently been doing this for the longest time.

Speaking about the shooting in Quezon that killed 13, Interior Secretary Manuel "Mar" Roxas on Wednesday, January 9, admitted that recent shooting incidents "show that PNP should further strengthen the regulation of firearms." (Can a gun ban prevent another Nicole shooting?)

PNP records show there are 1.6 million licensed firearms in the Philippines. A third of all licensed guns belong to the military and police. PNP estimates showed there are nearly 600,000 loose or unregistered firearms.

"We are creating recommendations for the President and we will submit this in the right time. We are reviewing the current regulations in licensing of firearms," he said. 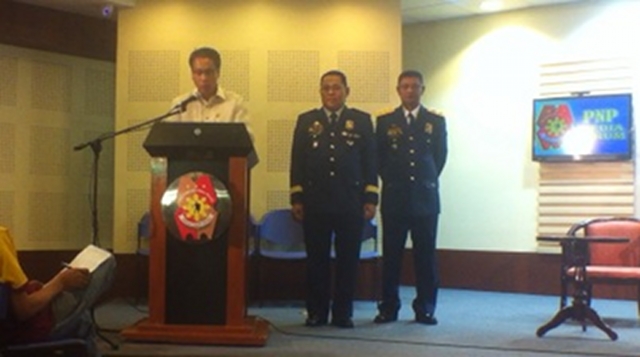 STRONGER REGULATIONS. Interior Secretary Mar Roxas said the PNP is looking into ways on how to strengthen gun ownership in the country. Photo by Natashya Gutierrez.

Roxas said they are trying to collect information on exactly how many firearms are out there – both licensed and not – and what types there are.

Past administrations have also issued a series of EOs that provided amnesty for citizens with unlicensed firearms, providing them the option of registering their guns without punishment, but records are still far from complete.

With a reignited debate on gun reform in the country, public officials have acknowledged the need for stricter gun control. But details have still to be ironed out on what exactly these changes are.

I just wish it weren't so easy to own one.