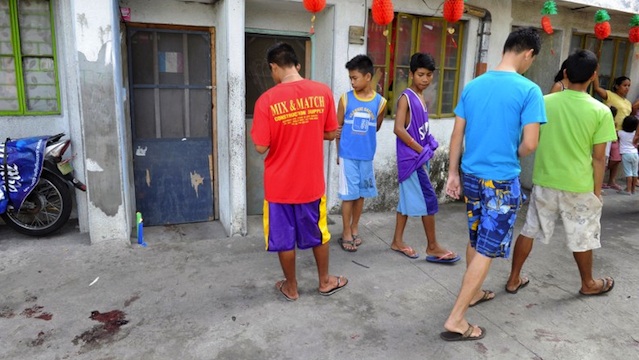 Residents walk past by a door with lighted candles (L) and blood stains (bottom L) after a gunman reportedly shot a mother and child during a rampage in Kawit, about 40 kms (25 miles) south of Manila on January 4, 2013. AFP PHOTO / JAY DIRECTO

MANILA, Philippines - Should the Philippines adopt a total gun ban to prevent tragedies such as the latest shootings which claimed the life of a young girl in Manila and 8 people in Cavite?

Lawmakers disagree on whether such law – proposed in 2010 and still a pending bill in Congress – would deter criminals.

Sen Vicente “Tito” Sotto III said on Sunday, January 6, that calls for a total gun ban in the country are “knee-jerk reactions” to the “western-style shooting rampage” in Kawit, Cavite where 8 people were killed, including the gunman, and 9 more wounded on Friday, January 4.

“I believe that a total gun ban would not prevent a repeat of the bloodbath but would only exacerbate the already grave peace and order problem in our country,” Sotto noted in a statement.

The senator claimed that if the Philippines outlawed guns, citizens would be at the mercy of armed criminal groups. He instead called for stricter enforcement of anti-drug laws to apprehend users of illegal substances like the Cavite shooter.

Sen Loren Legarda disagreed and said that the latest gun-related incidents prove that only those in police or military uniform should be allowed to carry firearms.

“It is high time that we enact bold and encompassing gun control reforms in this country. Let us heighten monitoring, ensure that there are no loose firearms, and impose stricter punishment on those who violate our rules and regulations. Furthermore, we must seriously look into revoking permits to carry firearms issued to civilians,” she stressed in a statement.

Legarda added that recent trends of violence are affecting all countries, not just the Philippines, and said that “aspiring for a gunless society is a step toward achieving genuine peace.”

Sen Panfilo Lacson, a former national police chief, concurred and called for the suspension of all permits issued to private citizens and even intelligence officers on covert operations.

Asked about whether the government will consider pushing for a total gun ban in the next few months, deputy presidential spokesperson Abigail Valte declined to clarify the position of the President Benigno Aquino III.

“There is a wide spectrum of the proposals that will have to be discussed,” she said during a radio interview on Sunday.

Valte explained there are different “gradations” in the proposals for a gun ban, and reminded the public that a bill is pending in the House of Representatives.

This proposed legislation, called the Citizen’s Protection Act of 2010, wants to limit the carrying of firearms in public to police, military and security personnel.

Civilians would therefore lose their right to carry deadly weapons.

The bill, filed by prolife groups and signed by 86 Roman Catholic bishops, was sponsored by former senators signatories to the proposal including former Senators Ramon Magsaysay Jr., Aquilino Pimentel Jr and Wigberto Tañada.

Rappler asked citizens what they think about a possible gun ban, and again there were mixed opinions.

Those in favor argued that a ban would reduce shootings and increase safety, but pointed out that there should also be stricter laws to curb sales of weapons in the black market.

@NotAgainApa pointed out that politicians will probably drag their feet on the ban because they are the ones who own the most guns, while @jabjimenez claimed that gun owners have a "sense of entitlement" and will refuse to hand over their weapons.

@gibbygorres called for a ban on private ownership on top of a more efficient police, security and justice system, and @the_red_illongo said that the Philippines also has to change its "culture of impunity" regarding gun-related incidents.

Those opposing the measure also expressed their concerns.

@pacific88 stressed that gun bans don't work and only target legal weapons, which are not used in most crimes.

"If legal guns are outlawed, only outlaws will have guns. What will you do when there's a burglar? Call 117? Wait 2 hours?" he tweeted.

@filsur1 went even further and suggested criminals would "love" a gunless Philippines, while @reezabells called for more law enforcement and stricter requirements for ownership.