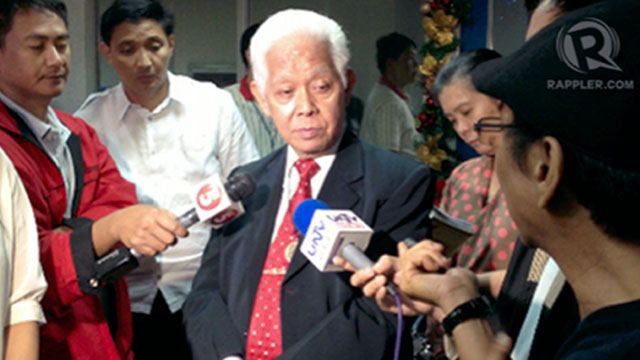 PARTY-LIST CUT-OFF. The Comelec will include in the ballot only groups that get a favorable SC ruling or reprieve before Jan 11. Photo by Paterno Esmaquel II

MANILA, Philippines – The Commission on Elections (Comelec) can only wait for so long.

If disqualified party-list groups want to be included in the ballot in the May 2013 elections, the Supreme Court (SC) should have issued a reprieve or ruling on their appeals by Friday next week, January 11. After this date, the Comelec can no longer accommodate status quo ante (SQA) orders or other rulings from the SC, Comelec chairman Sixto Brillantes Jr told reporters Thursday, January 3,

The Comelec is beating tight deadlines for the May 13, 2013 polls, and has in fact twice postponed the raffle for party-list slots in the ballot.

From the initial dates of Dec 12 then Dec 17, 2012, the Comelec moved the raffle to Friday this week, January 4. On January 11, the Comelec will hold a special raffle for disqualified party-list groups that can get an SQA order, a mandatory injunction, or a favorable ruling on their appeals.

The next step is the configuration of ballots for the Philippines' second automated elections.

(Beyond January 11, it's over. Otherwise we won't make it. Actually the configuration will start, so we really might not make it. Even the SC will be – I don't want to say we're untouchable, but we really can't force it and change it all. We can no longer add another name, because that would mean we will have to revise the entire configured ballot.)

Of over 80 groups that got an SC reprieve, the High Court has upheld the disqualification of only one group – Kabaka, which the poll body accredited for 2010. (Watch more in the video below.)

In a resolution issued last month, the Comelec said the following party-list groups may participate in the raffle:

The raffle takes place amid the Comelec's unprecedented purge of party-list groups. In late October, the Comelec allowed less than a third of applicants and previously accredited groups to join the 2013 party-list race.