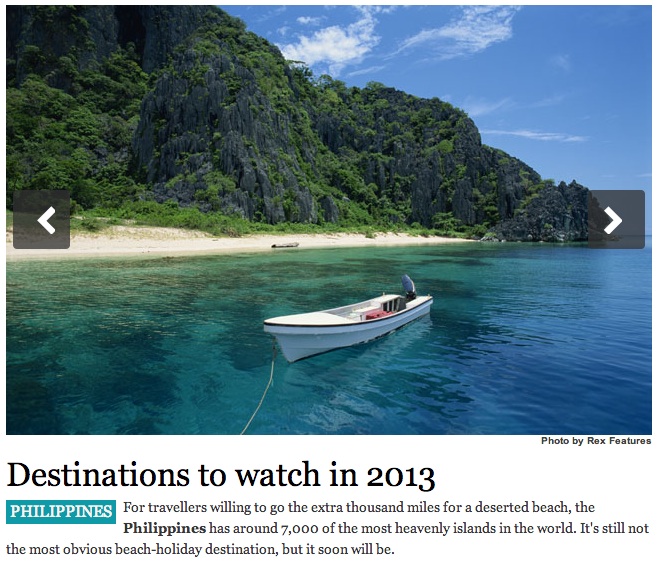 The London-based luxury travel magazine named the Philippines one of its 10 hottest new travel destinations for 2013.

In its article “Destinations to watch in 2013,” Conde Nast Traveller recommended the Philippines as a destination “we think will be big news for travellers in 2013.”

“For travellers willing to go the extra thousand miles for a deserted beach, the Philippines has around 7,000 of the most heavenly islands in the world. It’s still not the most obvious beach-holiday destination, but it soon will be.”

The magazine said the country is becoming popular among divers for its “incredible underwater life, unspoilt coral gardens with rainbow-bright fish, green sea turtles and dugongs.”

Conde Nast said, “Sorry, Maldives… We love you, but we’ve got a new flame.”

The recommendation comes after the Department of Tourism launched in 2012 its new campaign “It’s More Fun in the Philippines,” releasing ads on global TV networks and tourist sites abroad.

The article named Bicol, Siargo, and Palawan as must-go places.

“In Bicol you can swim with the biggest fish in the world, the whale shark. While fish-fans of a different nature can go deep-sea fishing in one of the deepest trenches in the oceans, not far from the little-known island of Siargao.”

“The archipelago of Palawan ticks all the boxes: palm-fringed white-powder beaches, crystal-clear turquoise waters, natural lagoons for wild swimming on Miniloc Island – all of it protected by UNESCO.”

It called Siargao’s Dedon Island “another super-stylish new opening” while Amanpulo is a “perennial favorite.”

“As the gateway to these private-island retreats, the Philippines capital of Manila is also having a moment. Among its new openings – another one in December 2012, is the Fairmont Makati City.”

Elsewhere in the world