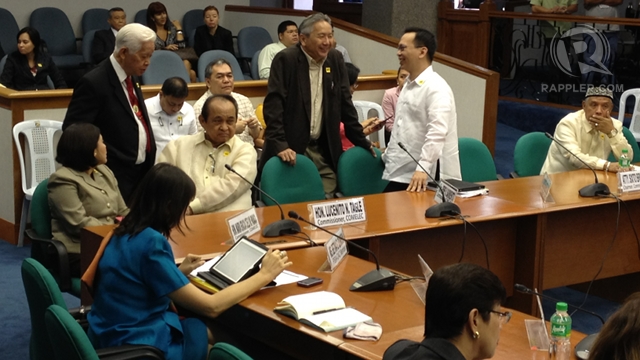 MANILA, Philippines – "Hindi lalagpas ng sandaan." (It will not exceed a hundred.)

Commission on Elections (Comelec) Chair Sixto Brillantes Jr on Tuesday, November 27, told reporters the Comelec will grant the bids of no more than a hundred old and new applicants for the 2013 party-list race. This is around 34% of the 289 groups that submitted their party-list applications in April.

In another interview with reporters, Comelec Commissioner Rene Sarmiento gave a more detailed estimate. Sarmiento said the Comelec will likely allow only 80 to 100 party-list organizations (PLOs) to run in 2013.

“There is a dramatic decrease in PLOs participating,” Sarmiento said.

Records show that the Comelec allowed 187 party-list groups to run in 2010, the last national elections held in the Philippines. In the elections before this, held in 2007, the Comelec accredited 153 groups.

This will make the 2013 ballot the shortest, in terms of party-list groups, for at least the last 6 years.

Sarmiento attributed this decrease to the 8 guidelines set by the Supreme Court (SC) in Ang Bagong Bayani-OFW Party vs Comelec in 2001. The Comelec has often cited the SC's standards on screening political parties, sectors, and organizations in justifying its party-list purge. The 8-point criteria include the following:

The parties must comply with the declared statutory policy of enabling “Filipino citizens belonging to marginalized and underrepresented sectors” to be elected;

The religious sector may not be represented in the party-list system;

The parties must not be disqualified under Section 6 of RA 7941 (Party-List System Act);

The parties must not be an adjunct of, or a project organized or an entity funded or assisted by, the government;

The parties must not only comply with the requirements of the law; its nominees must likewise do so; and

The parties must represent the marginalized and underrepresented sectors; so also must its nominees;

This SC ruling has been out since 2001, however. What has made the 2013 elections different?

Sarmiento, who has been with the commission for over 6 years, also attributed it to the Comelec's current composition.

“The commission is more critical this time, and I think that it contributed a lot – and our desire to trim down the number of party-list organizations," Sarmiento said in a mix of English and Filipino.

"Because if you will not stop the hemorrhage of party-list organizations participating, in 2016, the 187 might be 300, and forward. So not only will the list be longer, it will be costlier for taxpayers, too,” he added. (Watch the video below.)

Since he was elected in 2010, President Benigno Aquino III has appointed 3 to the 7-member Comelec – from the head himself, Brillantes, to Commissioners Christian Lim and Grace Padaca.

How has Brillantes, who was appointed in 2011, influenced the Comelec?

“He was a factor," Sarmiento said, "and the new members of the commission were factors. Taken altogether, there was a good synthesis."

But some groups still express discontent. If the case of the pro-Aquino group Akbayan was the Comelec's "biggest test," as the organization Kontra Daya earlier asserted, then the poll body failed it.

Voting 4-2-1, the Comelec en banc decided to allow Akbayan to run in 2013. The Comelec cited the group's track record in upholding the marginalized – even as critics said Akbayan is no longer marginalized due to its ties with the Aquino administration.

The Comelec, for its part, has sought to quell perceptions that it is "yellow," referring to Aquino's campaign color. The poll body has disqualified another pro-Aquino group, the Black and White Political Party, from participating in the 2013 party-list race.

Unlike Akbayan, however, Black and White does not occupy any seat at the House of Representatives.

Brillantes said the Comelec will complete the list of disqualified groups by the end of the week.

By then, the battle will completely shift to the SC, with disqualified groups running to the High Court to appeal the Comelec's decision. The SC has stopped the Comelec from enforcing its ruling on 11 groups so far.

The SC's rulings would determine the fate of the Comelec's biggest party-list purge in years. – Rappler.com