History of the Black Nazarene Festival

The Black Nazarene statue was brought to Manila by the first group of Augustinian Recollect friars on May 31, 1606. The image was originally housed in the first Recollect church in Bagumbayan (now part of the Rizal Park), which was established on September 10, 1606, and placed under the patronage of Saint Juan Bautista Saint John the Baptist.

In 1608, the image of the "Nazareno" was transferred to the second, bigger Recollect church dedicated to San Nicolas de Tolentino (Saint Nicholas of Tolentine). The Recollect Fathers dynamically promoted devotion to the Suffering of Our Lord represented by the image that in fifteen short years, the Cofradia de Santo Cristo Jesús Nazareno was established on April 21, 1621. The confraternity obtained Papal approval on April 20, 1650, from Pope Innocent X.

Sometime in the year 1787, then Archbishop of Manila, Basilio Sancho de Santas Junta y Rufina, ordered the transfer of the image of the Nazareno to the church in Quiapo, again providently placed under the patronage of Saint John the Baptist. The Black Nazarene made a lot of miraculous things. These are the survival of the image from the great fires that destroyed Quiapo Church in 1791 and 1929, the great earthquakes of 1645 and 1863, and the destructive Bombing of Manila in 1945 during World War II. Today the head and the cross stay on the Altar Mayor of the Minor Basilica, and the original body image of the Black Nazarene is used in the processions. Other, even smaller replica can be found in other churches.

Nuestro Padre Jesus Nazareno,
(Our Father Jesus Nazarene)
Sinasamba ka namin (We worship you)
Pinipintuho ka namin (we admire you)
Aral mo ang aming buhay (Your lessons are our life)
at Kaligtasan (and our salvation)

Procession of the Black Nazarene

A miracle after touching the statue?

During the feast of the Black Nazarene thousands of barefoot men join the annual procession. Walking barefoot during the procession is seen as a sign of humility.
During this procession the men yell "Viva Señor".

Everybody who is in the neighbourhood of the cross tries to touch the statue. People believe that a miracle can happen after touching it.
The statue was bought by a priest in Mexico and brought to Manila in 1606. 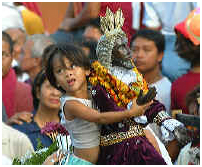 The Black Nazarene is a more than 200-year-old statue.
Black? One tale is telling that during the Spanish colonial period missionaries brought an icon to Manila. During the trip however, there was a fire on board and the icon, the Nazarene, caught fire. Despite its charred condition, the Nazarene was kept save and honored from then on.

The statue is to be seen in the Saint John the Baptist Church in Quiapo in Manila, where it has been housed since 1787. 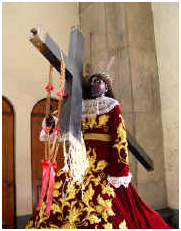