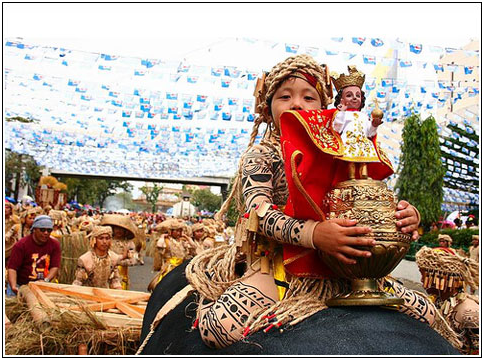 A grand procession of over two hundred well-dressed images of the Child Jesus.
The month of January in the Philippines is Santo Niño Festival Month. It is the period when many of our provinces, towns, and cities in Luzon, Visayas, and Mindanao pay homage to the Holy Child Jesus. They prepare months ahead in anticipation of the large volume of local and foreign tourists who will flock to their areas to watch and take part in the festivals.

The Tondo Fiesta that coincides with the Feast of the Santo Niño (3rd Sunday) is by far the biggest fiesta in Manila, not only because Tondo is the most populous district of the city but also because many tourists are attracted by the myriad of stories about Tondo’s miraculous image of the Child Jesus
The nationwide celebrations usually feature nine-day novena/masses in honor of the Holy Child; grand processions of folk, antique, and new images of the Holy Child in various manifestations – as a shepherd boy, as the keeper of the world, or as a sleeping child, among others; tribal-modern dance competitions where participants in colorful costumes perform street dancing to the beat of drums and lyre; beauty pageants; photo exhibits; a showcase of local plants, products, and crafts; and fireworks. In Kalibo, Aklan, a re-enactment of the barter trade from which the Ati-Atihan is believed to have originated is performed.

The popular devotion to the Santo Niño, which started in Cebu, has spread to many parts of Luzon, Visayas, and Mindanao. The Holy Child will always have a special place in the hearts of Filipinos, not only because we love children, but because of the numerous stories of miracles He has performed and our deeply ingrained faith in His power to grant healing, assistance during necessities, success in business, bountiful harvests, safe voyages, good health, guidance when taking examinations, approvals of visas to work abroad, or a gift of a child for childless couples, among the countless petitions lifted to Him in prayer. May the Holy Child bless our country and our people, and may He grant us all the things that we need to lead our country along the path of prosperity and peace.
Viva El Señor Santo Niño!