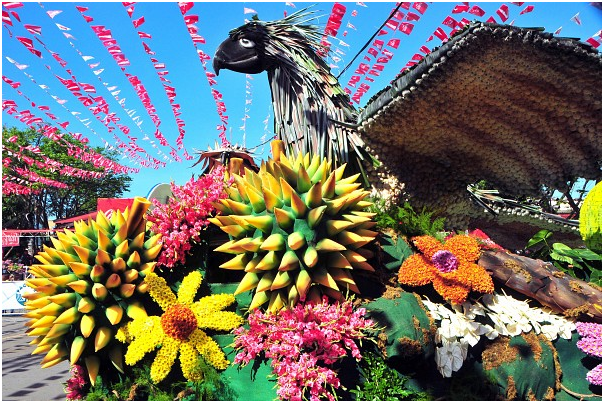 The festival is celebrated in the month of August with floats of fresh flowers and fruits, and indak-indak sa kadalanan or street dancing in colorful costumes. A variety of tribes parade the streets with their tribal costumes and jewelry. The city of Davao comes alive every year in August when it holds it yearly harvest festival. The streets are adorned with local fruit & vegetables while people hold street dances with abandon for four days. The harbour is the venue for native & power boat races. Everybody fights for seats to watch the Horse Fighting wherein stallions fight each other over the rights to mate with a mare. The crowd is sometimes tracked by the horses if they get too close. The last day the street is full of costumed dancers dancing to the local beat & decorated floats with glamorous Mindanao girls as eye candy. It's a time of fun & abandon. The festivity is not complete without the Bya'Neng ng Kadayawan or the Miss Kadayawan beauty contest. There is also the horsefight, a tribal animal show similar to the bullfight in Spain.

History
It was said that, long time ago, Davao's ethnic tribes residing at the foot of Mount Apo would converge during a bountiful harvest. This ritual serves as their thanksgiving to the gods particularly to the “Manama” (the Supreme Being).
Various farming implements, fruits, flowers, vegetables, rice and corn grains were displayed on mats as villagers give their respect and thanks for the year's abundance. Singing, dancing and offerings to their divine protectors are the highlights of this ritual.
Although times have changed, this practice of thanksgiving or "pahinungod" is still very much practiced by modern day Davaoeños. This tradition flourished and evolved into an annual festival of thanksgiving.
In the 1970’s, Mayor Elias B. Lopez, a Bagobo, initiated tribal festivals featuring the Lumad and the Muslim tribes of Davao City where they showcase their dances and rituals of thanksgiving.
Later in 1986, a program called "Unlad Proyekto Davao" was initiated by the government which was aimed to unite the Dabawenyos after the turbulent Martial Law era. At that time, the festival was called "Apo Duwaling," a name created from the famous icons of Davao: Mt. Apo, the country's highest peak; Durian, the king of fruits; and Waling-waling, the queen of orchids.
“Apo Duwaling” was meant to showcase the city as a peaceful destination to visit and to do business after 1986 EDSA Revolution.
Finally in 1988, City Mayor Rodrigo Duterte renamed the festival as "Kadayawan sa Dabaw" to celebrate the bountiful harvest of Davao’s flowers, fruits and other produce as well as the wealth of the city’s cultures. To this day, the festival continues to honor the city's richness and diverse artistic, cultural and historical heritage in a grand celebration of thanksgiving for all of Davao City's blessings.

Today
Today, Kadayawan has transformed into a festival of festivals, with a number of spin-off festivals in the region. The festival honors Davao’s artistic, cultural and historical heritage, its past personified by the ancestral Lumad people, its people as they celebrate on the streets, and its floral industry as its representatives parade in full regalia in thanksgiving for the blessings granted on the city. A celebration that interfaces the three aspects: tribal; industrial and; arts and entertainment. The festivities are highlighted with floral floats, street-dancing competitions and exhibits that showcases the island's tourism products and services.
Today, the recognized original tribes of Davao are here for political reasons. They are recognized because of their present day influence since they have organized themselves well. They are given deputy mayors to be their representatives to the political powers of Davao City. The present tribes of Davao is not based on historical accounts of the original inhabitants at all. They have removed the Mansakas and Mandayas from the list and replaced them with the Muslim tribes like Maranao, Tausug, and Maguindanao. Their reason is Mansaka is from Davao del norte and Mandaya is from Davao Oriental. What they didn't notice is the places they said have "Davao" in their names while the Maguindanaos, Tausugs and Maranaos are obviously not from a place called Davao. What is more ironic is that Mandaya and Mansaka have the word "MADAYAW" in their dialects from which the "Kadayawan Festival" is derived.
If the tribes are recognized because of their present numbers in a city then the Muslim tribes(especially the Maranaos) must have been also recognized as original tribes by other cities and municipalities since they are found in numbers in every city and municipality in the Philippines.