are exotic, using a number of spices, namely: chili, onion, and ginger. In general, Mindanao cuisine is a mixture of Spanish and Malay influence. One of the most common ingredients used by Mindanaoans in their daily food preparations is coconut milk. Aside from the fact that coconut is abundant in the region, it also adds a distinctive taste. 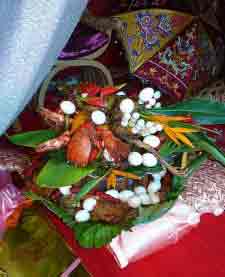 Obviously, the is the biggest area in the country with Spanish influence. One example of their produce that bears the Spanish mark is the Spanish sardines, one of the famous products of Dipolog City, Zamboanga Del Norte. Your trip to Zamboanga will never be complete without a taste of their famous curacha. The recipe is a combination of crab and lobster boiled in plain water. A mixture of coconut milk, chili, and other spices serves as sauce for this meaty curacha. In addition to Zamboanga’s delicacies are Zambo rolls or lokot-lokot.

region is best recommended for those who have the sweet tooth. This region in Mindanao is popular with their sweet delicacies, namely: salvaro (dry cassava), peanut biscuit, popularly known as cay-cay, and other durian products.

has been attracting tourists for years not only with its beautiful tourist spots but also with the foods served as well. The city of golden friendship, Cagayan de Oro is popular for its turones de mani. It is made of crushed peanuts coated with honey, and wrapped in wafer. The mouthwatering pastel of Camiguin island is also gaining popularity. Iligan City is famous for its greaseless peanut (Cheding Peanuts) and marinated wild pig, dipped in hot and spicy suka pinakurat. Binaki is a Bukidnon delicacy; it sounds weird but it tastes good. It is made of ground young corn mixed with milk and sugar and wrapped in fresh corncob. 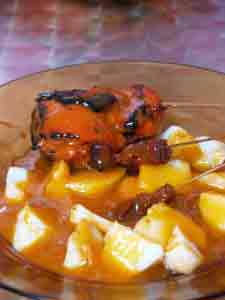 The is famous for its rice delicacies, namely: dudul, pastil, katilapan, pawa. Native dishes like chicken are cooked with curry powder. In addition to the list of Muslim delicacies are: putrid, sinigang baka, and tinadtag.

The beautiful sea waters of Socsargen produce abundant seafoods. In Gensan, for example, tuna delicacies like tuna hotdog, tuna longganisa, and tuna tocino are widely available. Aside from tuna, bangsi (flying fish) of Sarangani is prepared in different ways — fried, kinilaw, or cooked with coconut milk. Tasty crabs as well as prawn delicacies can also be enjoyed in this part of Mindanao.