Just like any other towns in the province of Bulacan , the town got its name from a tree called "Bukawe" found in abundance during that time in the said place. Bocaue was just a mere barrio of the town of Meycauayan until 1606 when it was made into a town with Reverend Padre Delos Santos as the first parish priest and administrator. Fire destroyed a large part of the town in 1818, but was later rehabilitated gradually during the American regime. The history of Bocaue is not complete without citing the legend of the Holy Cross of Wawa which has a great significance to the residents of this town as to its founding. The celebration of the feast in honor of the Holy Cross has been made a tradition and a yearly affair. 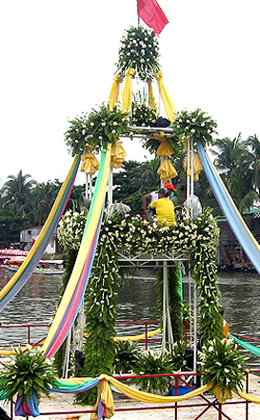 The legend says those centuries ago, a woman was saved miraculously fro drowning by an image of the big wooden cross floating along the flooded river in barrio Wawa this town.The woman, the story goes, was about to sink when she caught a glimpse of the image of the cross. She tried to take hold of it but it moved farther. The woman followed the image until she clung to it and then was able to reach safely the riverbank.

Every First Sunday of July, the town of Bocaue in the Province of Bulacan celebrates the fluvial Bocaue Pagoda Festival, the Pagoda sa Wawa, which commemorates the discovery of the miraculous cross floating on the Bocaue river 200 years ago. 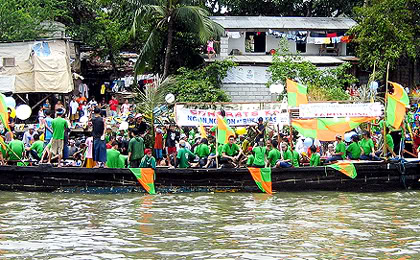 During the Bocaue Pagoda Festival, a replica of the cross on which Jesus was crucified is paraded on a pagoda adorned with magnificent trimmings and guided by by colorful bancas. Hundreds attend the procession for a nine-day novena, during which they feast and celebrate the legendary rescue of the Holy Cross from the Bocaue River

The Bocaue Pagoda Festival has a cross which rides on top of a pagoda adorned with magnificent trimmings and guided by colorful bancas. Hundreds of people attend the procession for a nine-day novena, during which they feast and celebrate the legendary rescue of the Holy Cross from the Bocaue River 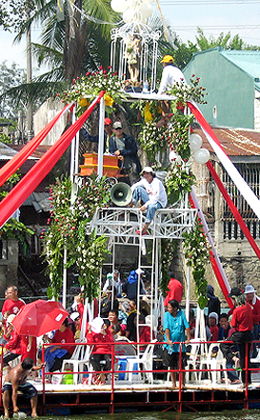 What is unique about the Bocaue Pagoda Festival festival however is the procession down the river with a huge ornately decorated pagoda float. The float is atop a barge and the river is the Pasig River. Thus is the Holy Cross of Bocaue brought down the river.

Accompanying the pagoda are hundreds of devotees. Probably because of the river setting devotees customarily douse each other with water during the procession. Moreover, those who cannot find space on the crowded pagoda simply swim alongside.

The Bocaue Pagoda Festival was held at that time was that of the Sto. Nino, more commonly known as the Pagoda Festival. As ususal people rode a multi-leveled Pagoda especially built to float downstream.

People were dancing, eating, singing and enjoying themselves. But the floating pagoda was overloaded and has exceeded its maximum capacity. Eventually the pagoda begun to sink slowly at first but soon the rate of descent rapidly increased.

When the pagoda started to flood panic ensued. People began jumping into the deep waters. Some made asore but many drown.

Today the Bocaue Pagoda Festival continues, part of it to remember the dead. This tradition will continue as usual with better order and safety. But for sure the Bocaue river festival will live on for a long long time.