The cave is west of the Pintal River directly across from the barangay’s irrigation intake structure. You can either do the short swim across or go downstream and wade across the shallower portion of the river. Continuing another 30 meters west over the rubble along the river bank, you’ll reach the Front Lagoon * that is 20 meters wide by 50 meters long depending on the rains. The Front Lagoon is actually a sump with no visible connection with the river but we believe it does underground. You’ll have to swim about 36 meters to get to the entrance of the cave, which is at the eastern bank of the lagoon. This bank is actually large breakdowns across the entrance and you can see the turbulence generated as water flow under them.

BTW, Duba Cave is not only a wet river cave but a swimming cave. Almost all passages with water, which is about 70% of the way to the Skylight Falls, have large breakdowns or walls without handholds along the side so the only way through is to swim. Because of this, it is highly recommended that personal floatation devices (PFDs) are used by all entering the cave. This will ensure a safe return trip especially after the long swims in. 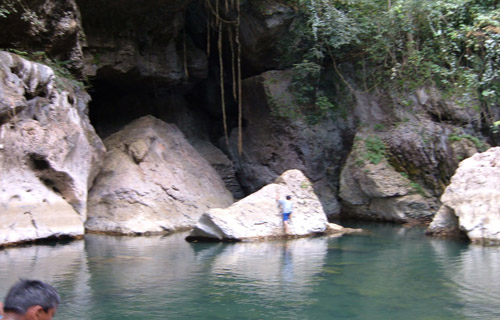 At the cave entrance, you’ll climb about a meter onto the breakdowns that have blocks the flow of the water creating a second lagoon upstream, the Green Lagoon , in the first chamber. A large section of the chamber’s ceiling has completely collapsed creating a large skylight about 15x20 meters. The skylight allows enough sunshine to sustain the vegetation on top of the large breakdowns. We wonder if these are the original vegetation from the surface that followed when the ceiling collapsed because the breakdowns seem to have a layer of topsoil or if they were transplants after the breakdowns fell. Again you must swim, this time 41 meter, and again climb 4 meters on large breakdowns to the only dry passage. 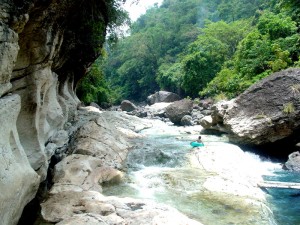 In the first section of the dry passage , there are high ledges on both walls that follow for about 55 meters. In the second section , the southern wall is mostly vertical and we suspect that what seems to be the northern wall are actually very large breakdowns that split from the now existing wall. Maybe these breakdowns were part of the ledge in the first part of the dry passage. During this section, you follow a natural meandering trial with gentle slopes on both sides of talus, pebbles, mud and guano.

Then you’ll get to the “LONG SWIM” ! It is just shy of 150 meters with no place to rest except to just float. The walls are similar to the second section of the dry passage, mostly vertical southern wall and the conjectured separated breakdowns as the northern wall.

Next you’ll get to a talus build-up with the water cascading through it; you can finally get out of the water and rest. From this point until the waterfall there are no longer very large breakdown forming the northern wall and the high ledges appear again like the first section of the dry passage. We are suspecting that during very high waters there is flow between the existing northern wall and the separated breakdowns. This is evidenced by the heavy silt deposits at the downstream end of this “breakdown chain.”

And finally you arrive at the Skyline Falls with its deep pool at its foot. The last swim is only 15 meters, the shortest yet, and you’ve reach a point where advance climbing techniques would be required to scale the falls. Another option would be to find the fall’s skylight on the surface and enter using single rope technique. This option will require two drops because there is a ledge between the skylight and the top of the falls. At the top of the falls the passage continues eastward and is subject for future exploration. 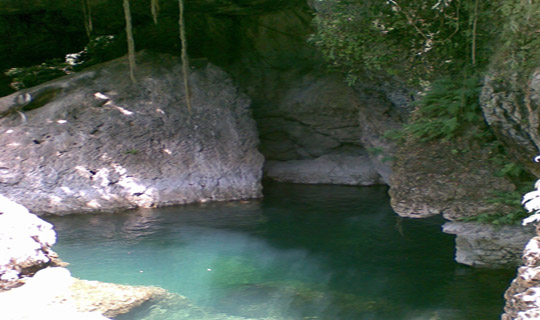 The cave was explored and surveyed as part of the Baggao Cave Guide Training held 14-19 April 2009. Initially, it was explored by two NSS (SoCalGrotto) members, Daniel Veelik and Betty Farfan, along with Esteban M. Perez (Sierra Madre Outdoors Club), Rawen E. Balmaña (Balincaguin Conservancy), and local guide, Melvinor P. Razos.  It was their recommendation that everyone have individual PFDs, They also recommended that “pull ropes” are rigged as an aid for tourist in the swimming portions. This way they can pull themselves instead of swimming in the wet portions. Even experienced swimmers can tire especially in the cold waters.

Because of the time constrictions of the training workshops and rains, the survey was done in two separate days. Immediate after two days of rains, the trainers took an Israeli tourist, Gil Sheffer, who arrived during the workshops and wanted to go into Duba Cave. Unfortunately, the group only reached the Green Lagoon because water was flowing over the breakdowns forming the lagoon . We suspect that the dry passage was then filled with water. However, the following days, the water flow was gone and the second day of surveying continued to completion. Another interesting note is the numerous logs scattered throughout the cave, they are not just branches but large trees, some with their root system still attached. 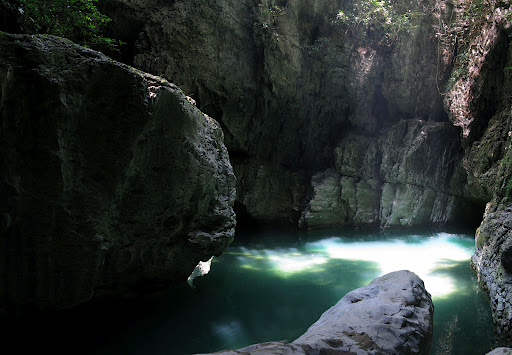 The surveying team had to use two truck inner tubes because of the swimming portions but individual inner tube would have been better. Many of the stations were literally “floating station” set on vertical walls just about water levels and those without inner tube had to float in the cold water. Unfortunately, we weren’t able to measure the depth of the waters for fear of getting the tape stuck on the rocks at the bottom. During our next visit we will bring a measuring string with knots at preset increments just for that purpose.

How to get there

The town of Baggao is two hours drive from Tuguegarao City, which is the capitol of the Province of Cagayan, in the northeast coner of the Island of Luzaon, Philippines. Go past Brgy. San Jose, the seat of the municipal government, to Brgy. San Miguel and drop by the Barangay Hall to get your P10 cave entrance permit from Brgy. Captain Razos; guides are also available there for P500 each.